Baseball Is Back! Check Out Our 2021 Guide To Baseball Road Trips. 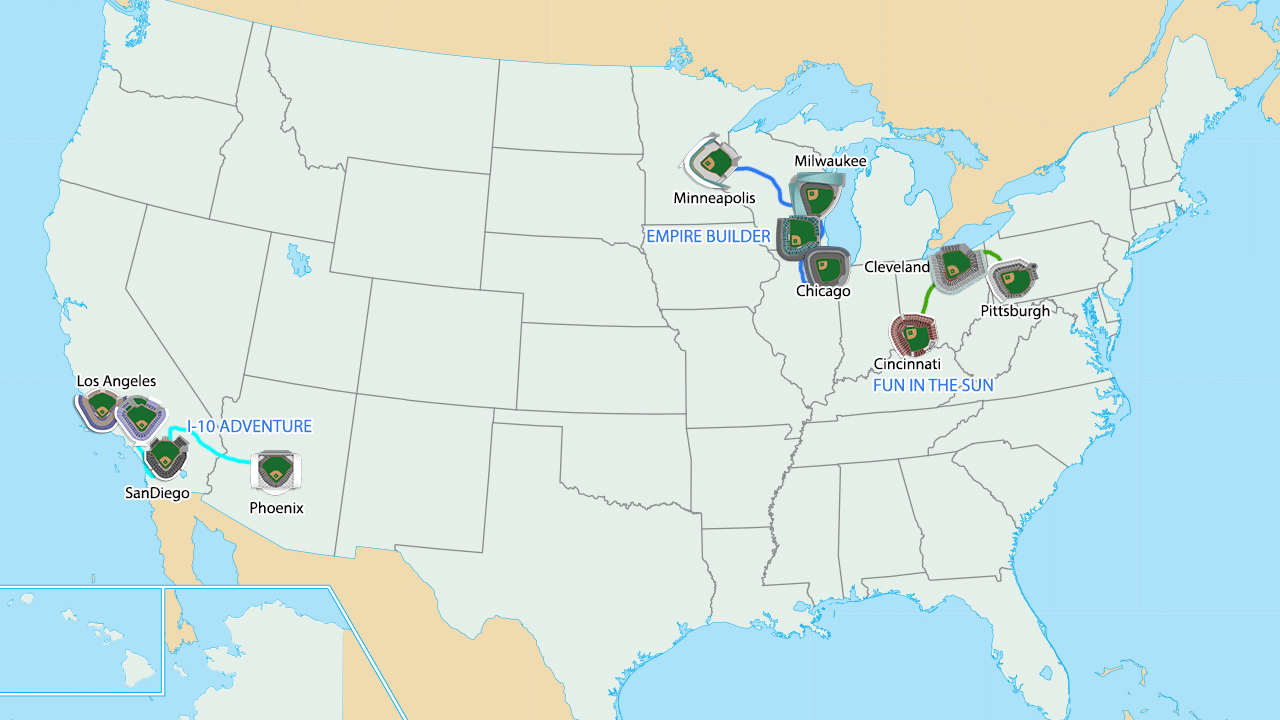 Fun In The Sun

The Fun in the Sun trip runs from June 10-13th, has a total drive time of 6.5 hours, and take you through two states.

It starts with a 12:35 businessperson’s special at PNC Park and then proceeds to Progressive Field. After the Indian’s 7:10 game against the Mariners the trip becomes a choose your own adventure for a day. The next day on the 12th you could stop at the Wyandot Popcorn Museum, and Dayton for a Dragon’s night game or drive 4 hours straight through to Cincinnati; for our final stop, the Reds’ 1:10 game at Great American Ball Park. 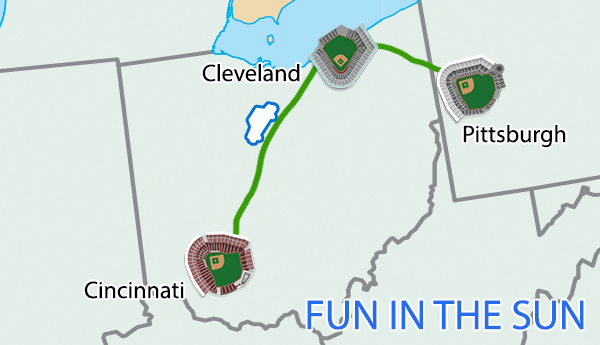 We're recommending Guzzista's great above home plate view because PNC Park has one of the most remarkable skyline backdrops in all of baseball, and the seat will be in the shade for the Pirates' 12:35 game, on 6-14, against the Dodgers. 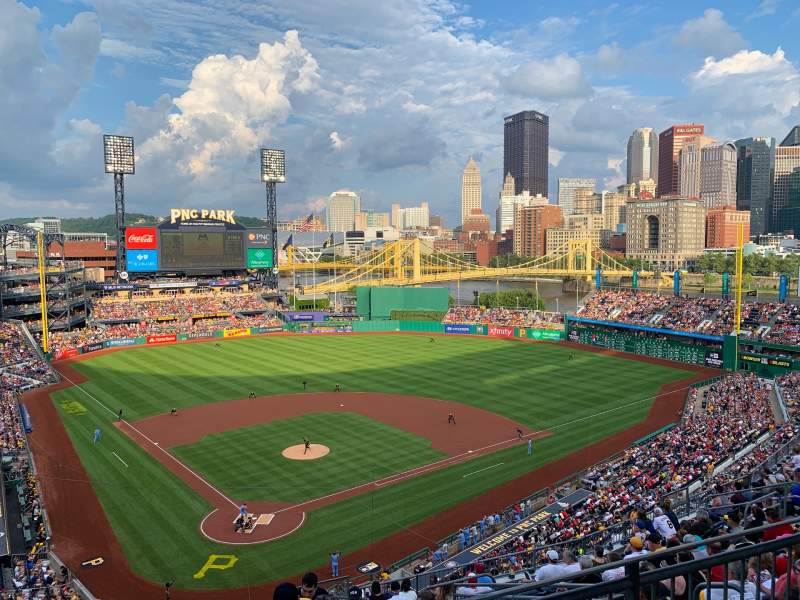 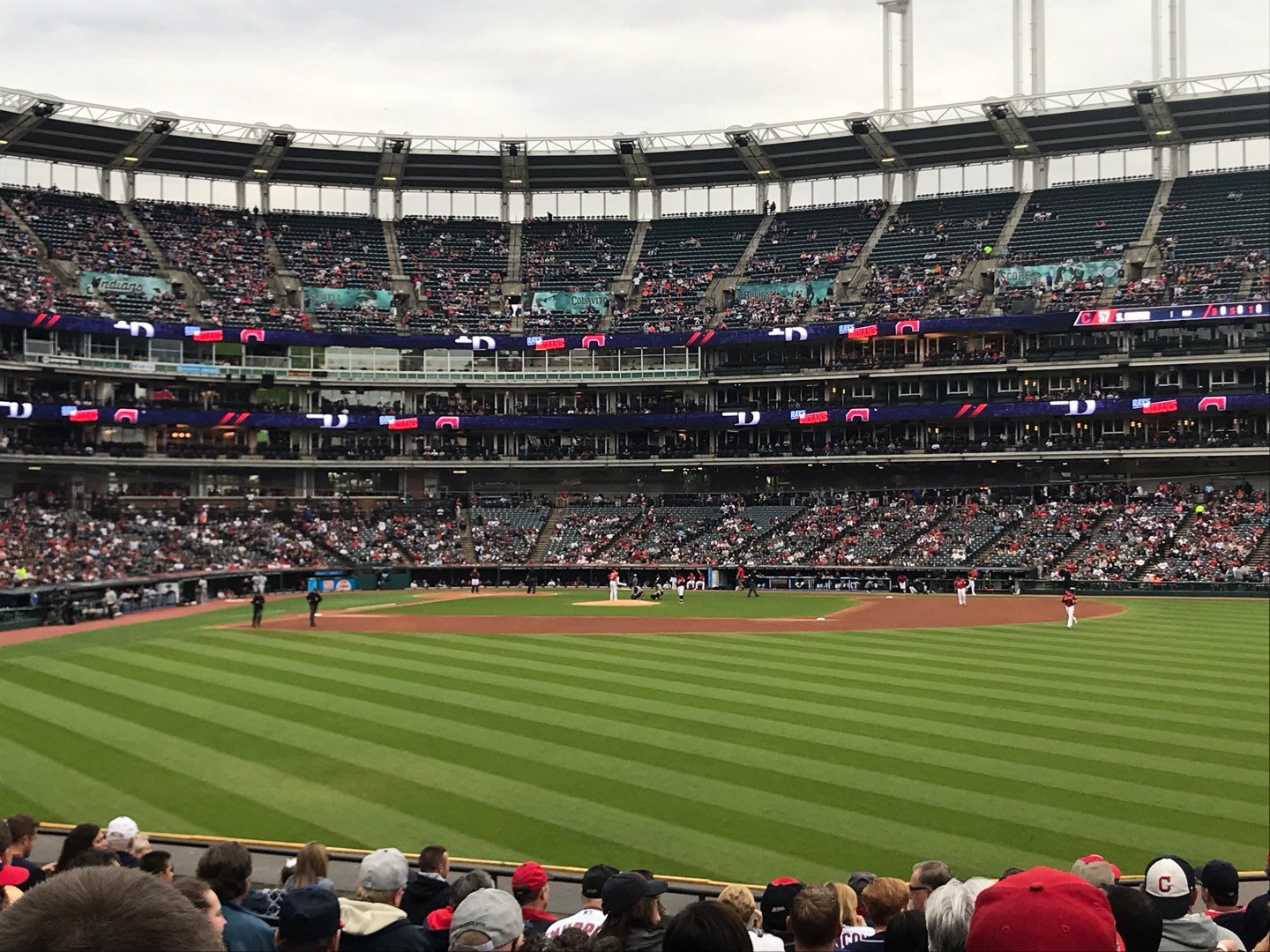 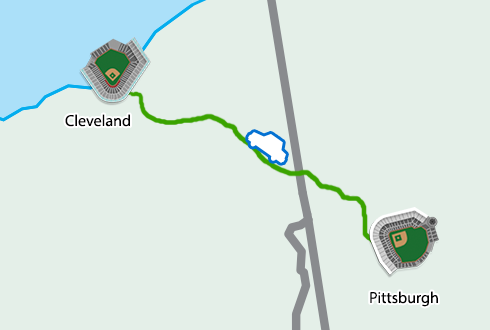 After a short 2 & a half hour drive north to Cleveland we have our next game in our Fun in the Sun baseball weekend.

The Indians are hosting the Mariners on Friday and dhlaroche's center field spot seemed perfect for relaxing and enjoying the game.

June 12th: 3 Options to Get to Cincinnati from Cleveland 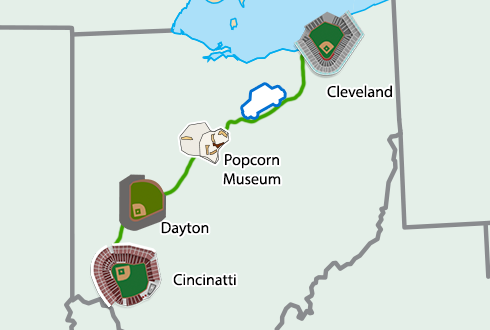 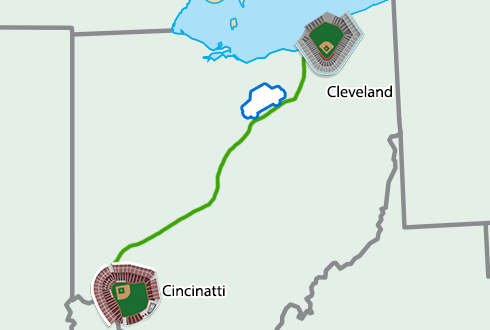 On June 13th be sure to bring sunscreen, a ballcap, & water (sealed plastic bottles of non-alcoholic drinks are allowed at GABP) to full enjoy the Reds' first pitch at 1:10; from Radiobrewster's sunny spot behind their dugout along the 1st base line. 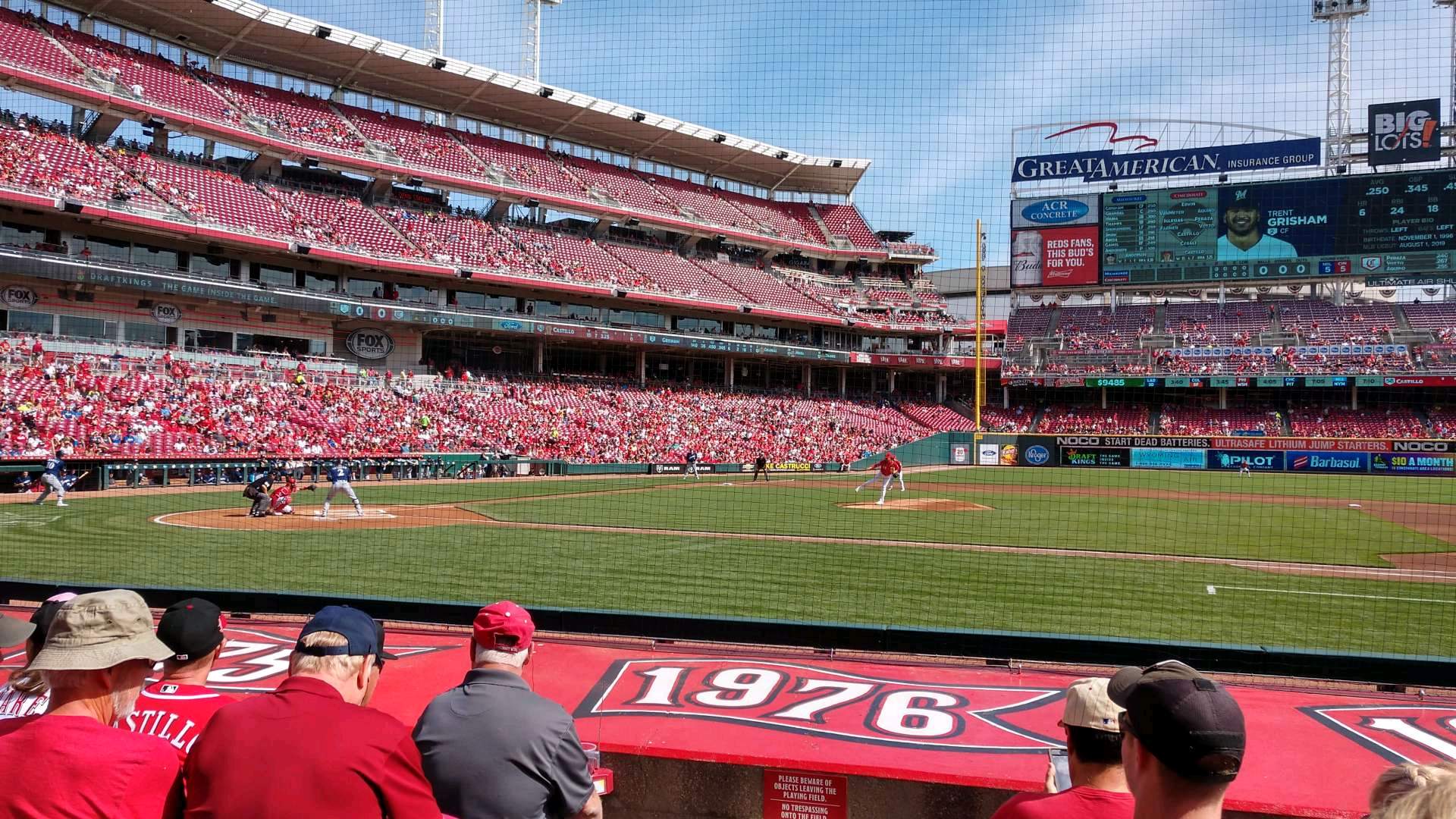 For those further north west the Empire Builder baseball weekend is for you. Named for the train route that has facilitated rail travel between these cities since 1929.

This trip’s first game is on June 9th, at CHS field, home of the Twins new AAA team, the St. Paul Saints. Then on the 10th it’s across the Mississippi River for the Twins’ 7:10 match

The 11th is a driving day. You’ll have a scenic 5 hour dive along 94 -> 90 towards Milwaukee. there are two diversions for the 11th; you could stop at Crystal Caverns outside of Minneapolis to enjoy some stalactites and/or catch a Lakeshore Chinooks’ 6:35 game at Kapco Park, about 45 minute north of Milwaukee.

Then on the 12th is your Brewers’ game, they’ll be facing the Pirates at 310. We recommend that after the game you roll an hour and half down the west side of Lake Michigan to Chicago because the cubs are taking the field at 1:20, on the 13th. Enjoy the 14th in Chicago (if you haven’t taken a Chicago Architecture River Cruise yet you should, it’s great), as the final game of the trip is the Whitesox’s 7:10 against the Rays. 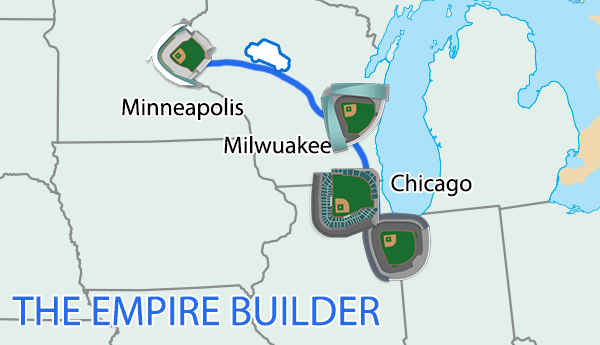 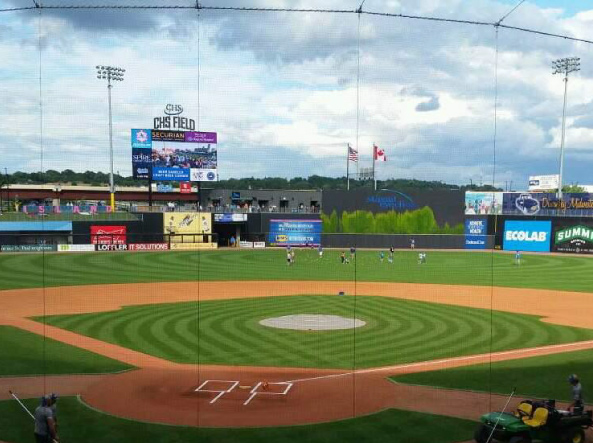 It's exciting that the St. Paul Saints, who have been just across the Mississippi River since ’93, have been brought in as the Twins' new AAA team.

At CHS Field your behind homeplate view is all business, look at those trees, while from the outfield it's all party with a great view of the St. Paul skyline. 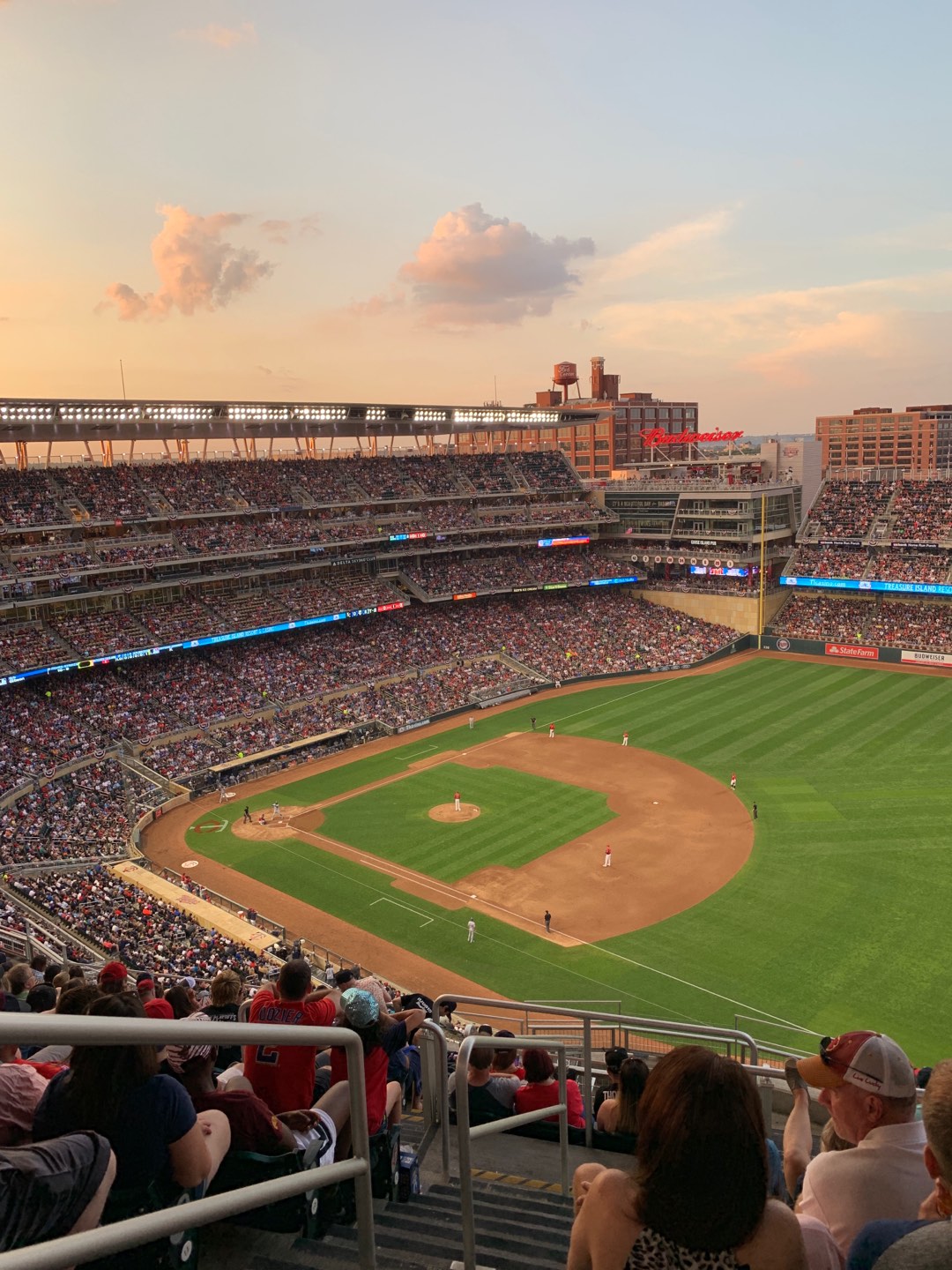 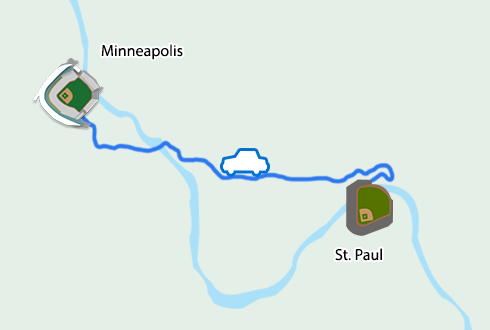 The second game starts at 7:10 with the Yankees batting first.

We like lisawheatley's 1st base line view because of the lovely sunset & if the Twins called someone up, you saw yesterday in St. Paul, he'd be hanging out of the closest dugout on the left.

June 11th: 2 Options to Get from Minneapolis to Milwuakee 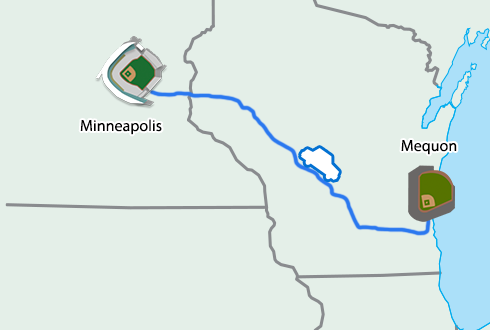 Drive from Minneapolis to Mequon, 354 miles. 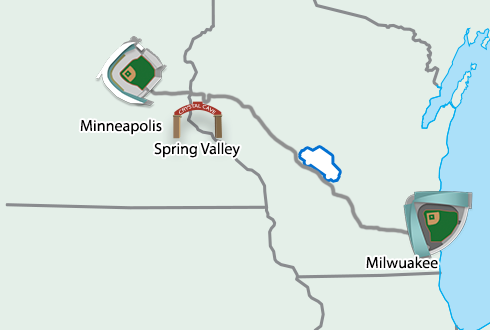 Drive from Minneapolis to Spring Valley to Milwuakee, 348 miles.

Drive from Mequon to Milwaukee, 19 miles.

Next up is the Brewers' 3:10 Saturday game against the Pirates.

Picked Allibally's great seat because it's in the shade when the roof is open, it has extra leg room, & a great view of Milwaukee's dugout on the right. 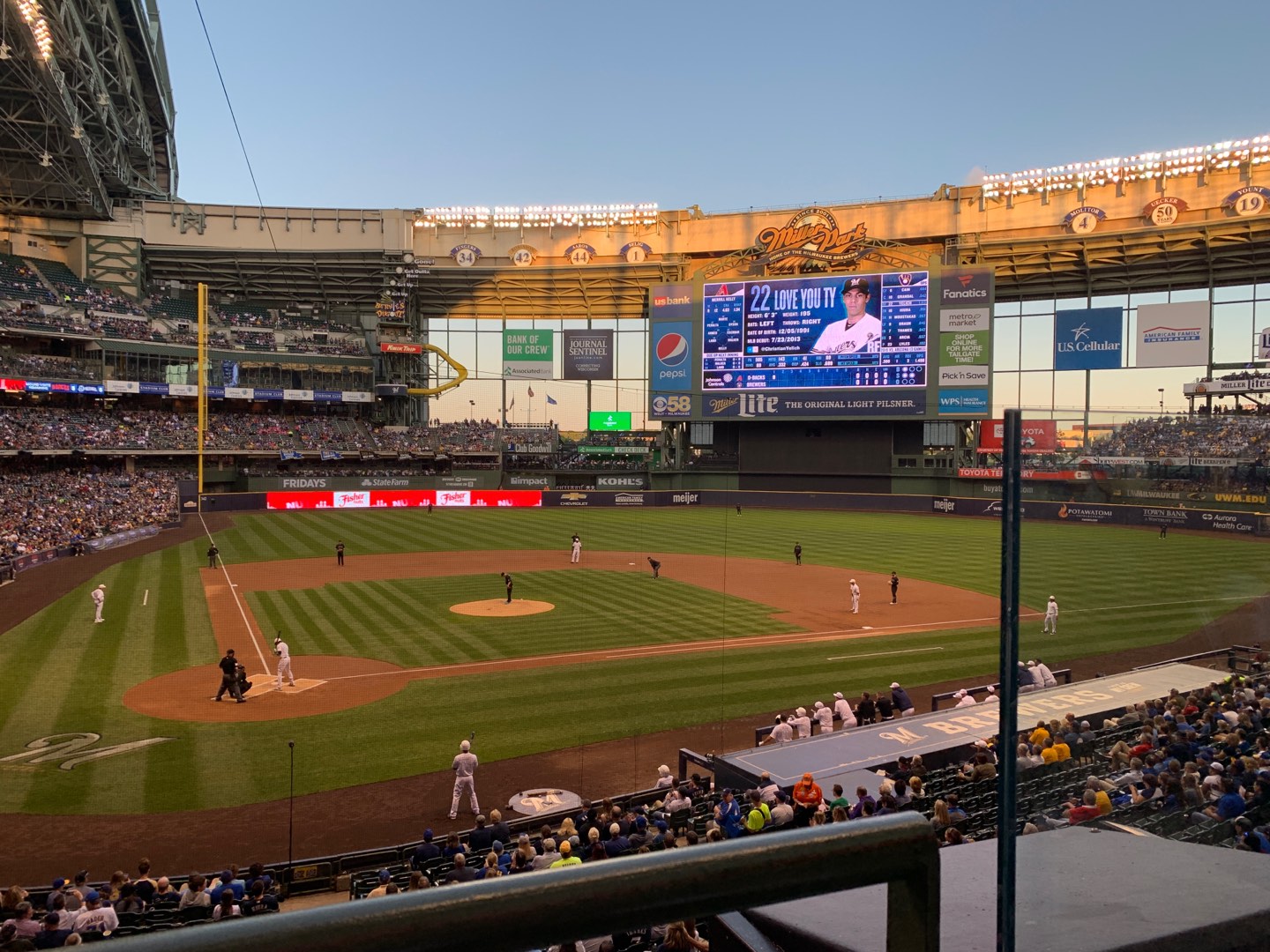 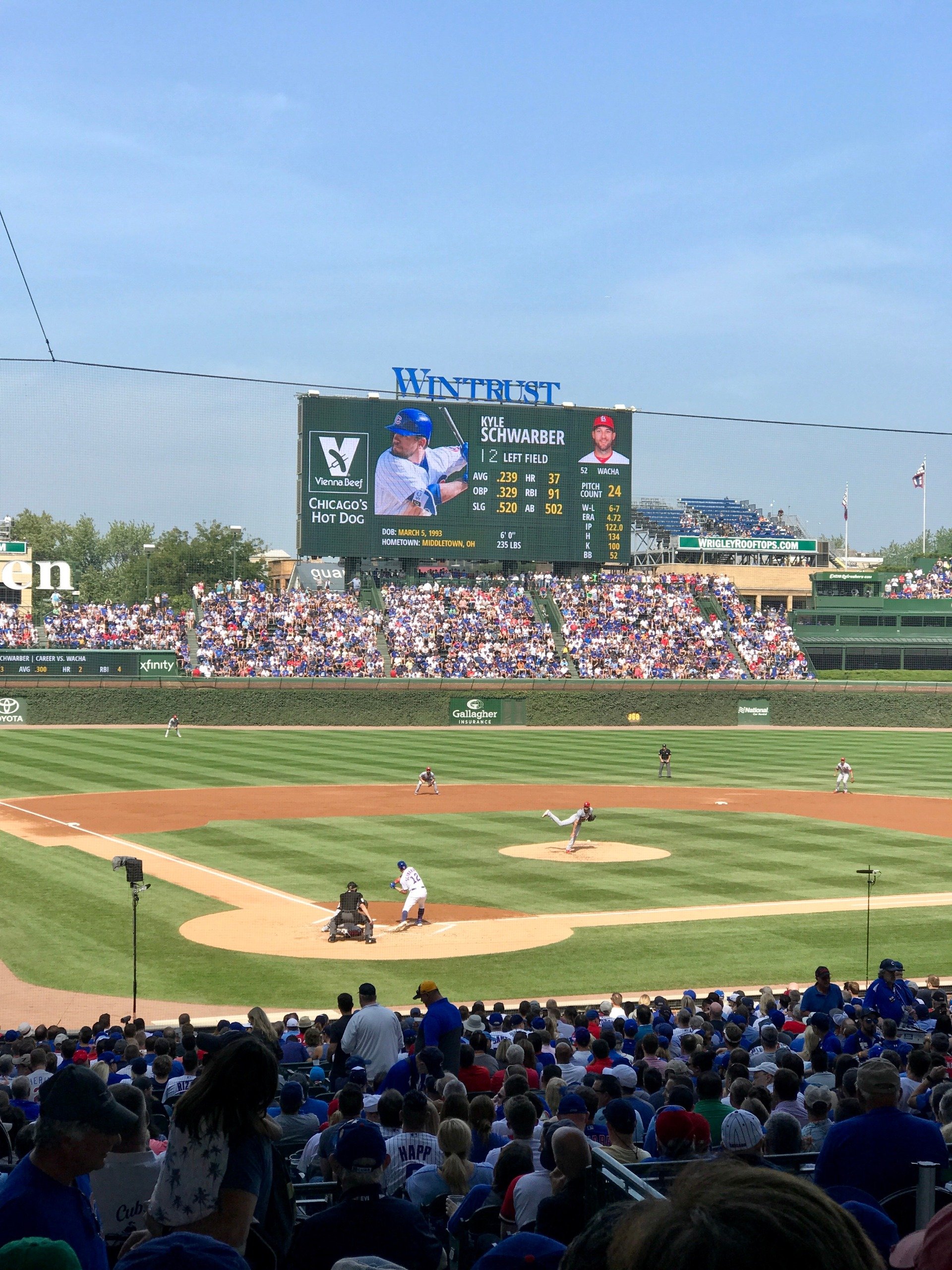 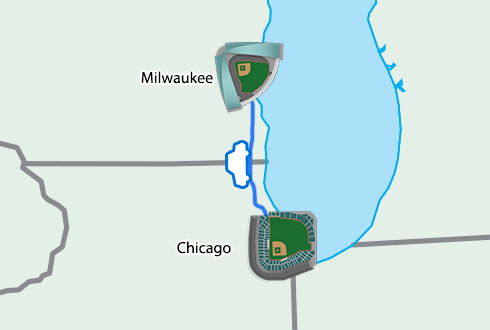 Drive from Milwuakee to Chicago, 90 miles

The trip's last city is a 2 hour drive down Lake Michigan's west shore.

We like davidgrove's exciting behind homeplate view for the Cubs' June 13th, 1:20, game. To the left of this shady seat will be the Cardinals' away dugout & to the right is Chicago's. 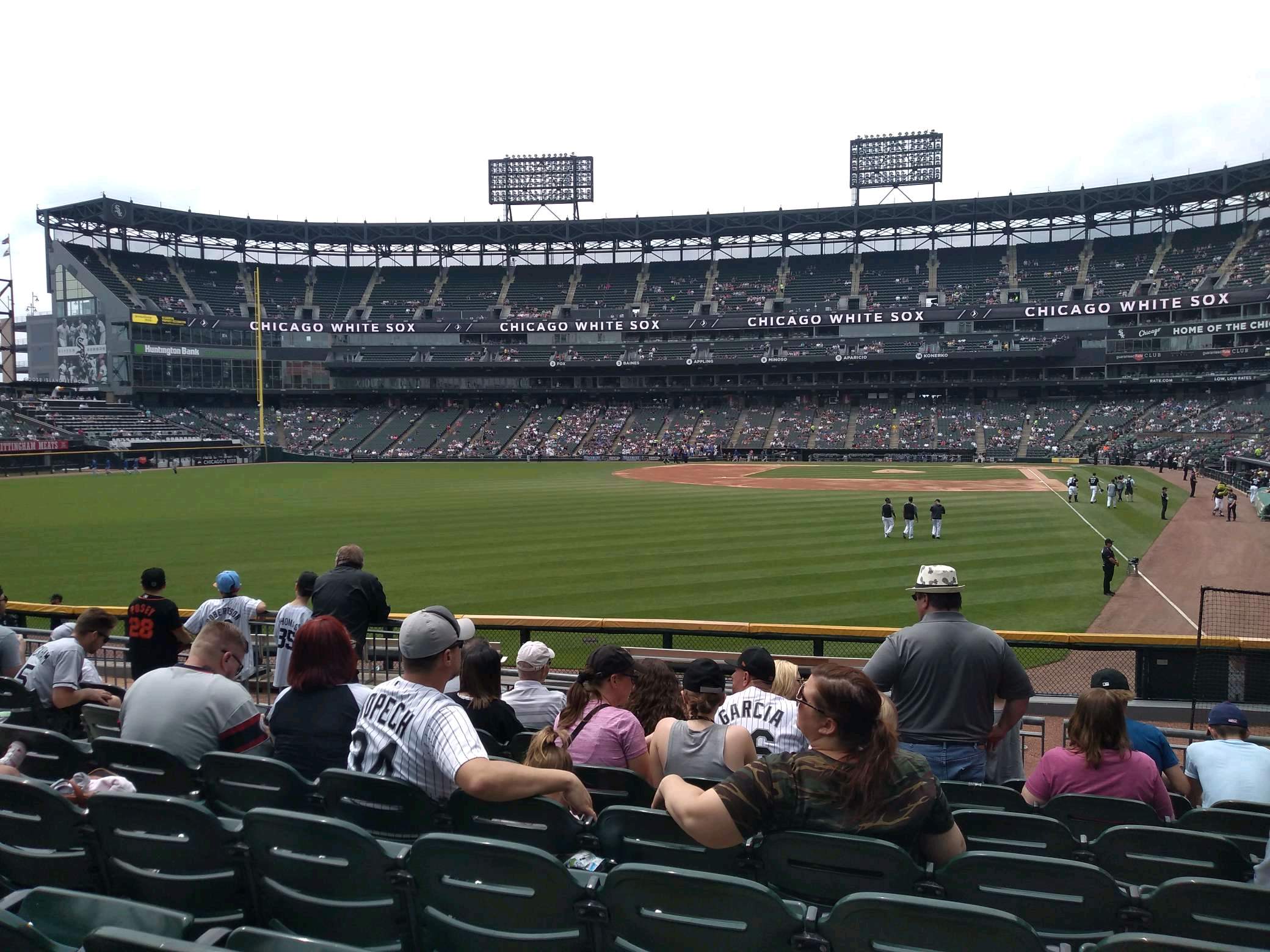 The White Sox's June 13th game against the Rays is the last game of our Empire Builder road trip.

We're thinking artoo840's "great seat", "8 rows behind the Sox bullpen", will be a perfect spot to relax behind left field & maybe get a home run ball.

For those in the southwest your trip is the I-10 adventures. It's about getting as much baseball and landscape in as possible. It's tailored for you to spend a few days at Joshua Tree national park while also catching four, maybe five, baseball games in Southern California and Phoenix. We recommend that you decide which Diamondbacks’ game to go to based on how much time you’d like to spend basking in the majesty of desert.

The Southern California portion of the trip starts with the Angels’s game on the 23rd and it’s a five hour straight drive from Phoenix to LA. So if you’d like to spend the afternoon at Joshua Tree, catch Arizona’s game on the 21st and stop off at the National park for a couple of hours to break the drive up. If you’d like to spend all day and a night at Joshua Tree, catch Arizona’s 1:10 on June 20th. Once in Los Angeles the Angels’ and Dodgers’ games are set in stone because the Dodgers aren't at home the day before and the Angels aren't the day after. So it’s off to Angel Stadium on June 23rd and Dodger Stadium, with a new outfield pavilion, on June 24th. After this you’ll have a scenic 2 hr drive down I-5 for the Padres’ game on the 25th. On your way back (it’s 355 miles) to Phoenix we recommend taking I-8 and visiting Kofa National Wildlife Refuge.

There are a couple of alternatives If you’d like to start with Kofa, catch Arizona on the 19th, drive the 20th & 21st, check out the Padres on the 22nd, then roll to LA for the same games as above, and on the way back take 10 for Joshua Tree. The other alternative is starting in LA, though that schedule is early in the month; it runs from June 16th - 20th. Essentially it’s Dodgers on the 16th, Angels on the 17th, Padres the 18th, the 19th is a driving day, and the Diamondbacks are on the 20th. 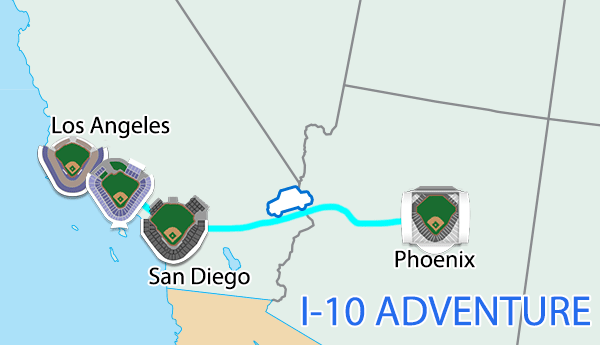 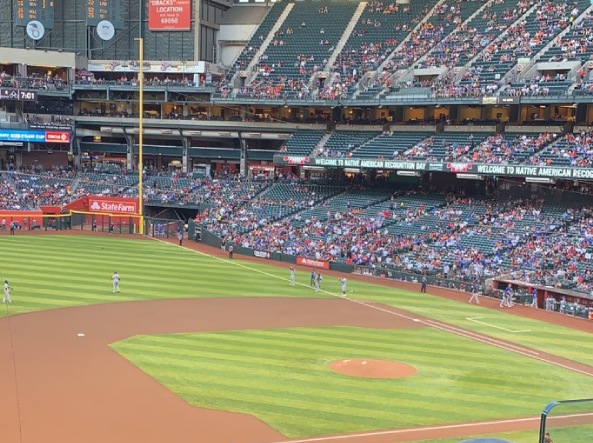 It's exciting that the St. Paul Saints, who have been just across the Mississippi River since ’93, have been brought in as the Twins' new AAA team.

At CHS Field your behind homeplate view is all business, look at those trees, while from the outfield it's all party with a great view of the St. Paul skyline.

Joshua Tree is about 4 1/2 hours from Phoenix & will be around 100°. Be sure to pack lots of water to enjoy the desert's majesty & opulence safely. 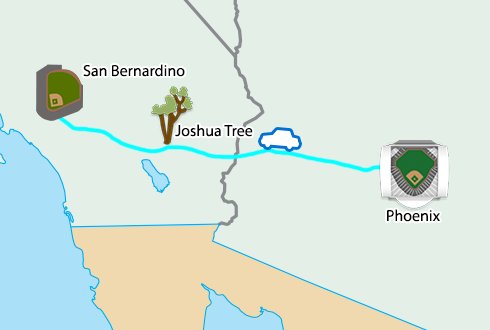 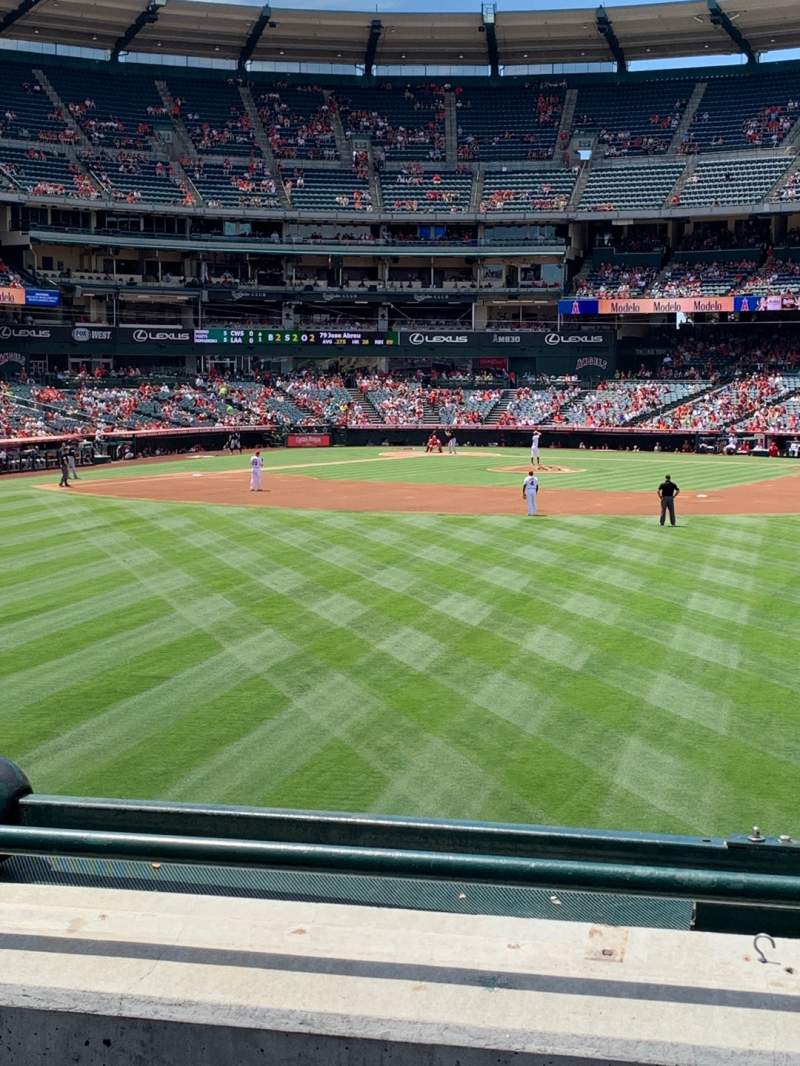 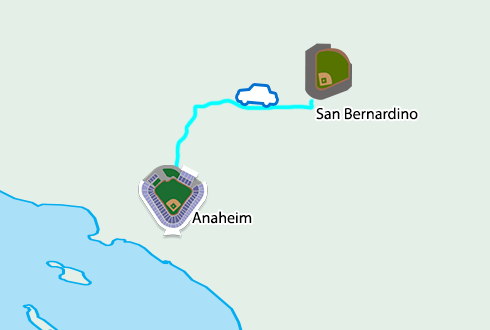 Next up is the Angels' 1:10 intra-league against the Giants. So break out your sunscreen, lather up, and enjoy rwscull's awesome center-field seat that will be behind Mike Trout in the top of the innings.

After spending an enjoyable day in LA, it's off to Dodger Stadium to roam around their new outfield pavilion before their 7:10 game against the Cubs.

Thought it'd be fun to sit in cmfjon's terrific close-to-the-action spot behind the Dodgers' dugout. 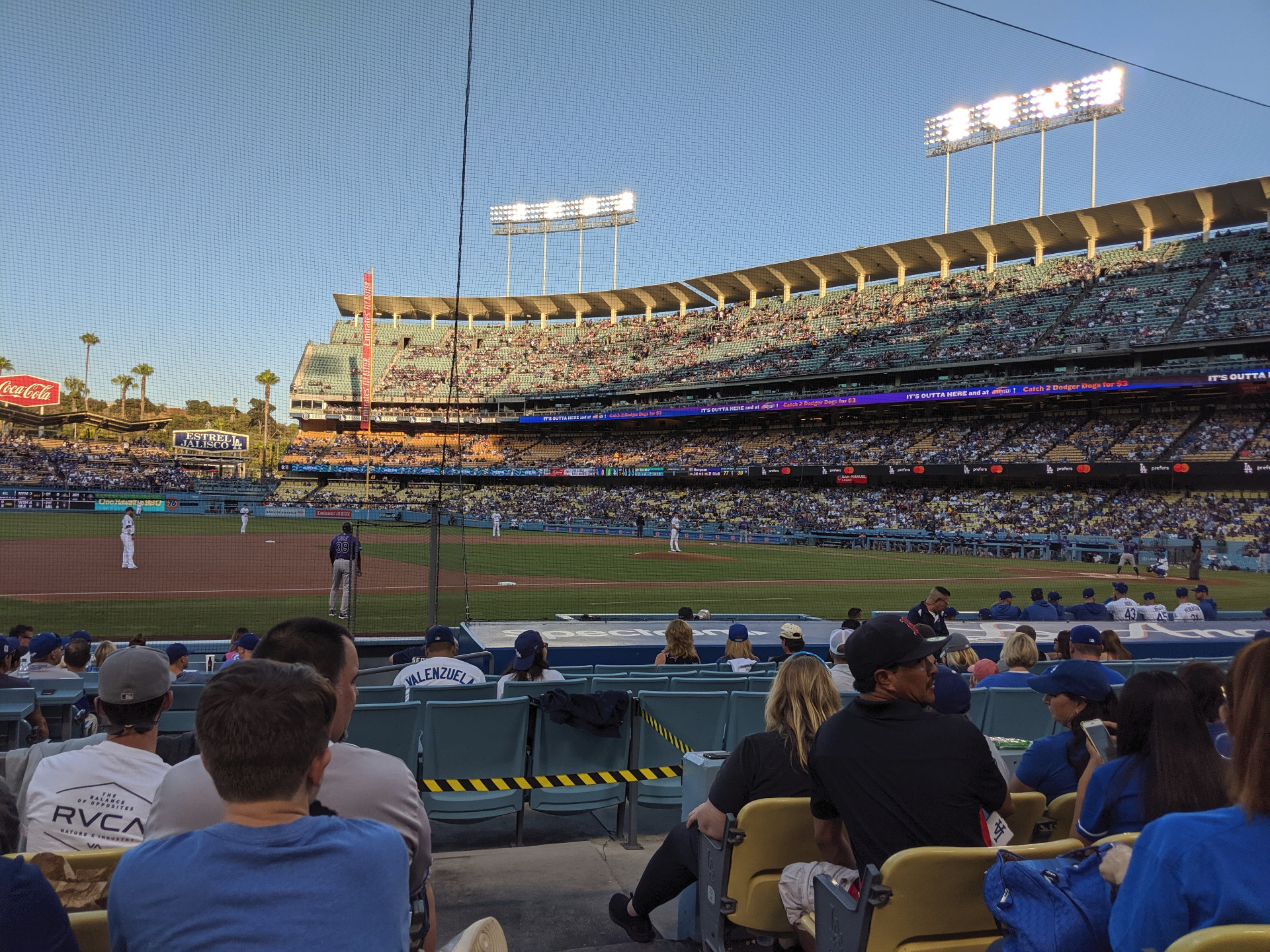 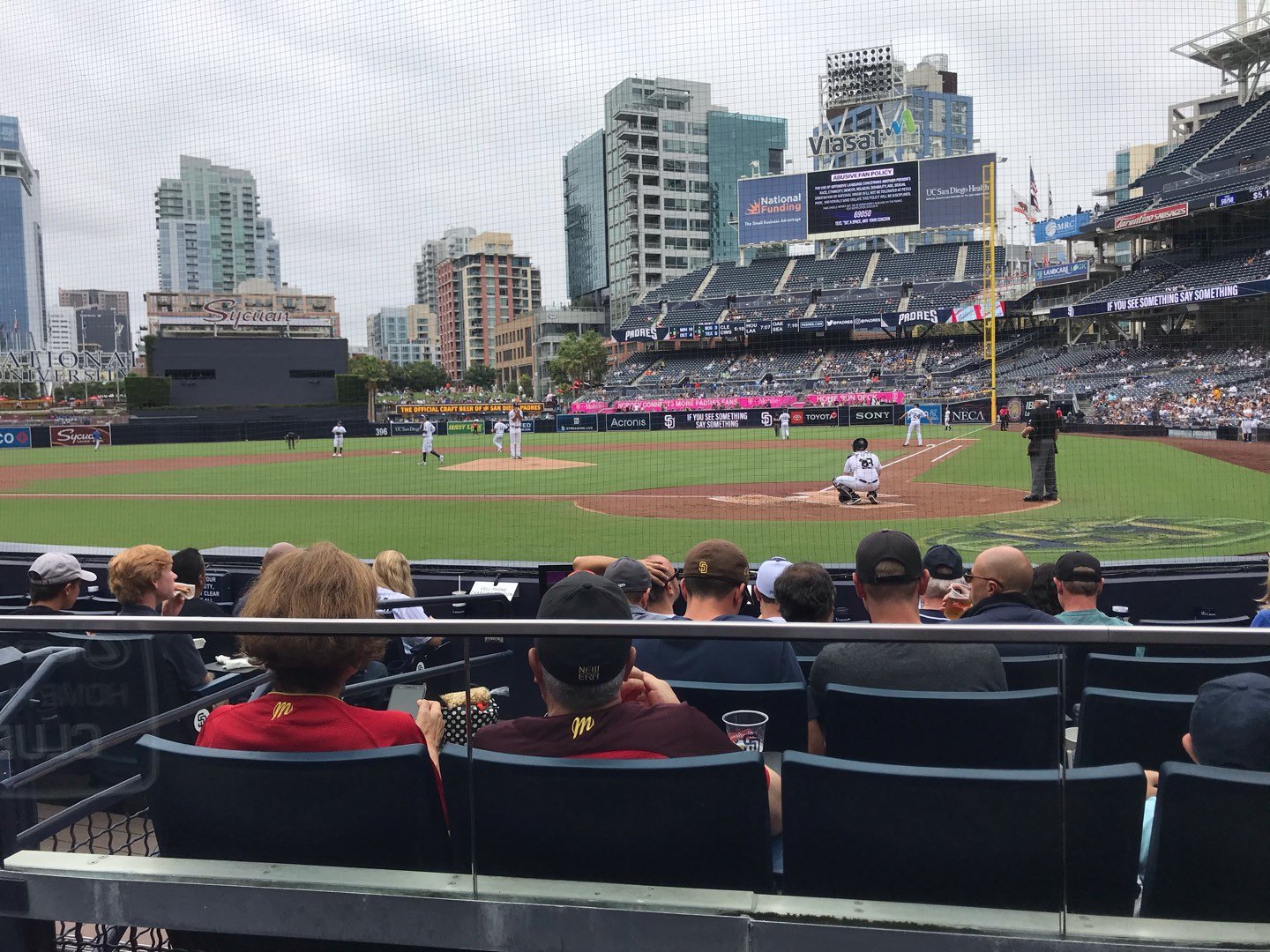 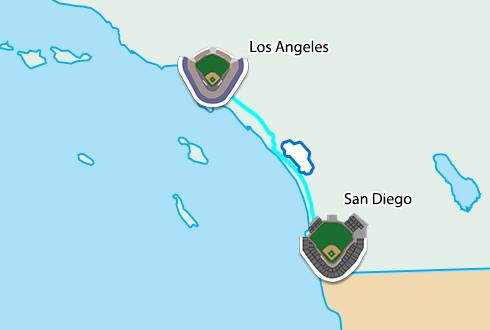 After a two hour drive down I-5S we're upon our final stop, San Diego.

And from DJCarlsbad's "Awesome seat" you'll be able to call the Padres' first pitch, at 7:10, to the Dbacks (Wonder they'll have the same line-up as before?), a ball or strike. 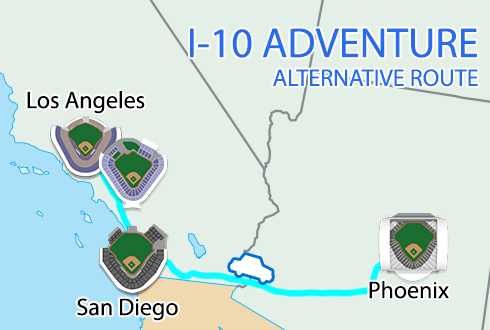